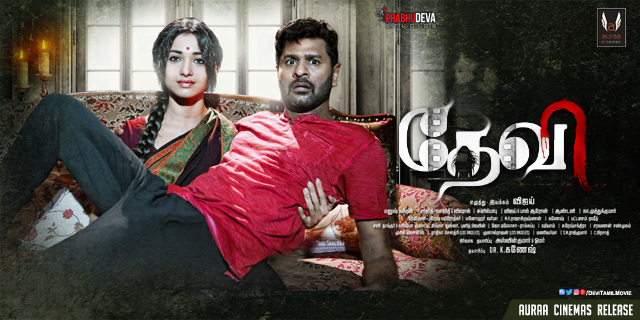 “Devi” is newly released movie that has been released in three languages namely Tamil, Hindi and Telugu. The Tamil version of the movie has star cast of Prabhudeva, Tamannaha and Soonu Sood in lead roles. Along with them Nasser, R.J.Balaji, Marina Sathish and few others have acted in the the movie. The movie has been directed by Al.Vijay. Music for the movie has been scored by Sajid-Wajid and Vishal Mishra and Back Ground Music by Gopi Sundar. Manush Nandan has scored the music and Anthony had made the editing cuts. The movie has been produced by Isari K.Ganesh and Prabhudeva on behalf of Prabhudeva Studios Pvt. Ltd.

Prabhudeva hails from a middle class family from southern part of Tamil Nadu and works in Mumbai in a corporate company. It happens for his to make a sudden visit to his village to see his ill grand mother. In the mean time Prabhudeva gets married to Devi(Tamannah) forcefully by his family members. Though Prabhudeva is totally dissatisfied marrying Devi, he takes her along with him to Mumbai and settles in a mansion kind of house. Prabhudeva focuses himself as a bachelor with his office colleagues and others.

On one occasion Prabhu Deva takes Devi along with her to an office get-together, but keeps himself separated from Devi. After the get-together is over, Prabhudeva moves into a pub in the same premises. Prabhudeva gets shocked when he sees Devi dancing with modern dress for a song. Later he takes her to his mansion. The next day when she wakes up, she behaves normally with him. Devi’s mannerism keeps changing often and Prabhudeva gets confused of her activities. Later Prabhudeva comes to know that a girl names Ruby had lived in that house earlier and committed suicide. He understands from his neighbours that Ruby’s ambition was to become a actress on demand and everything went unfilled due to her suicide and her spirit was roaming inside the house.

Soonu Sood comes as a leading film star named Rajkhanna and assumes her as Ruby and commits Devi to act in his movie as a Heroine. Prabhudeva who tries to express the truth about Devi fails to do so due to the influence of Ruby’s spirit which vanishes his voice.

You have to watch the movie to know whether Devi acted in Soonu Sood’s movie or not! Does Devi accept the love proposal of Soonu Sood!! Whether Prabhudeva and Devi live together or not!!!

Appreciations: Prabhudeva’s dancing skill still looks energetic. Prabhudeva’s comical acting make the audience laugh and enjoy. Tamannah’s acting remind us once again about her talent she had earlier exposed in Bahubali. Tamannaha’s expressions especially during her split personality scenes are to be appreciated. Though Soonu Sood appear as Raj Khanna a movie Hero, his activities portrays about real villainism present in a Hero’s life. Sajid-Wajid & Vishal Mishra music for the songs are awesome. Audiences would feel like dancing for ‘Chal Maar’ and ‘Tutak Tutak Tutiya’ songs when it appears on the screen. Gopi Sundar’s Back Ground Music keeps supporting for the movie . Editor Anthony’s cuts keep the movie crispy.