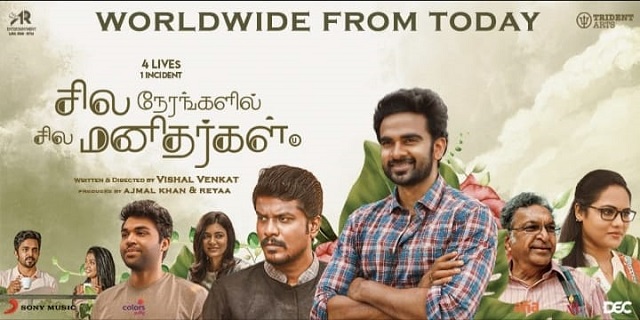 Firstly,
Ashok Selvan plays the role of Nasser’s son in this movie. According to the story, he works in a cellphone showroom and is set to marry his lover in a month. They get married with one of the family’s consent. Ashok Selvan is a stubborn man who wants his father to listen to him and act according to his decisions.

Secondly,
Abi Hassan plays the role of the son of a famous director KS Ravikumar in this movie. Without any recommendation, he is getting introduced in the movie industry. He is a self centered man who doesn’t even obey his father.

Thirdly,
Manikandan plays the role of a house keeping supervisor in a private hotel for many years. He always thought that newbies who learnt from him are now managers and he’s still a supervisor.

Fourthly,
Praveen Raja and Riythvika play the role of a couple in this movie. Praveen is the one who intends to project him comfortably. Praveen kinda brags about his expensive purchases. Riythvika pretends that she can’t live like that.

One of the characters in these four stories, changes the fate of them. Who is it? Why does this happen? is the rest of the story.

Meiyendiren’s cinematography was good. Radhan’s music is appreciable. There are few anthological movies which have come in tamil cinema. But this movie has made a benchmark covering the taste of the audience. Vishal Venkat has to be appreciated for his nice screenplay and presentation of this movie. Though there has been a lag in the first half of the movie, the director has managed with a better pace by engaging the audience in the second half of the movie.