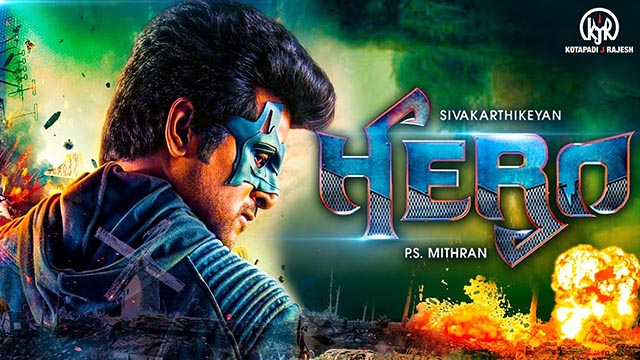 24AM Studios is a company involved into production of movies. The company is owned by R.D.Raja. Raja would had earlier started his venture in 2010 as a Promotion Consultant for movies later elevated as Creative Producer for movies. In the year 2016, he made his maiden production through ‘Remo’ in the year 2016. Later he produced ‘Velaikaran’ & ‘Seemaraja’. He is currently producing few other movies which are still Un-titled. All the movie produced by R.D.Raja were made on his own banner 24AM Studios.

Interlocutory Application filed by TSR Films Private Limited it is mentioned that R.D.Raja has borrowed an amount of Rupess Ten Crores from TSR Films Private Limited. In regard to avail the loan, R.D.Raja has executed a loan agreement duly signed by him and two other Guarantors dated 11.09.2018 crystallizing the interest payable at 24% p.a. and penal interest at 2% upon default. As per the agreement, In Clause 2 of the Terms of Loan they have agreed as, “i. The lender has advanced the Principal to the Borrowed to funds the business development of the borrower’s business. ii. The Principal shall not be used for any other purpose unless to this effect is obtained from the borrower.” The Interlocutory Application also mentions as, “According to this clause they undertook to run it by The Claimant in case of any change in diversification of funds. The 1st to 4th respondents issued negotiable instruments such as promissory notes and cheques to secure the transaction including the Principal and interest. The entire loan amount was payable before expiry of 10 months from the date of Loan Agreement.”

It is mentioned in the Interlocutory Application that in case R.D.Raja fail to repay the amount borrowed within the stipulated time, TSR Films can present the Cheque in the Bank for collection of payment. Since R.D.Raja had failed to repay within the stipulted time to repay the money, TSR Films have presented the cheques and the same have been returned as dis-honoured cheques. A seperate criminal has been initated by TSR Films for dishonour of Cheques and Promissory Notes.

In the meantime, TSR Films has approached ‘Madras High Court Arbitration Centre’ seeking recovery of money lent to R.D.Raja. Learned Sole Arbitrator Mr.M.Ganesan after thoroughly examining the documents has made an order on 8th November 2019 as, “In result, upon careful consideration of the facts and circumstances, the respondents herein are injuncted by an order of ad-interim injunction from releasing the application schedule movies and cine productions by the respondents or any other person, natural or juristic claiming through them and are restrained from any manner alienating or encumbering the schedule movies and cine productions till the disposal of the Arbitration proceedings.

SCHEDULE OF MOVIES AND CINE PRODUCTIONS

Readers might get confussed why the movie “Hero” star-cast by Sivakarthikeyan in the lead role, directed by P.S.Mithran and produced by KJR Films is being ordered with an Ad-interim Injunction. As per the Interlocutory Application filed by TSR Films, it mentions as, “It is submitted that the 1st respondent with intent to defraud the Applicant has transferred the completed movie named Production 5 or SK15 also known as Hero to the 5th respondent and it can be clearly inferred from the series of letters dated 10.11.2018. Further from extract of tweets submitted before this Hon’ble Tribunal it is abundantly clear that the 1st respondent is the primary participant in production of the movie recently named as ‘Hero’ starring Sivakarthikeyan and Directed by PS Mithran. In such circumstances, the documents filed along with the claim petition would show confirmation letter from the lead actor issued in favour of the 1st respondent. In the light of the same it is highly irregular to claim that the projects are distinct, and they have nothing to do with each other.

As per the Ad-interim Injunction order issued by the Learned Sole Arbitrator Mr.M.Ganesan, it clearly mentions that Sivakarthikeyan starrer, P.S.Mithran Directorial movie “HERO” produced by KJR Studios has been issued with a Ad-interim Injunction order restraining from its release. It is also said that a notice sent by Dhanaram Ramachandran, Counsel for TSR Films addressed to KJR Studios was returned as refused. 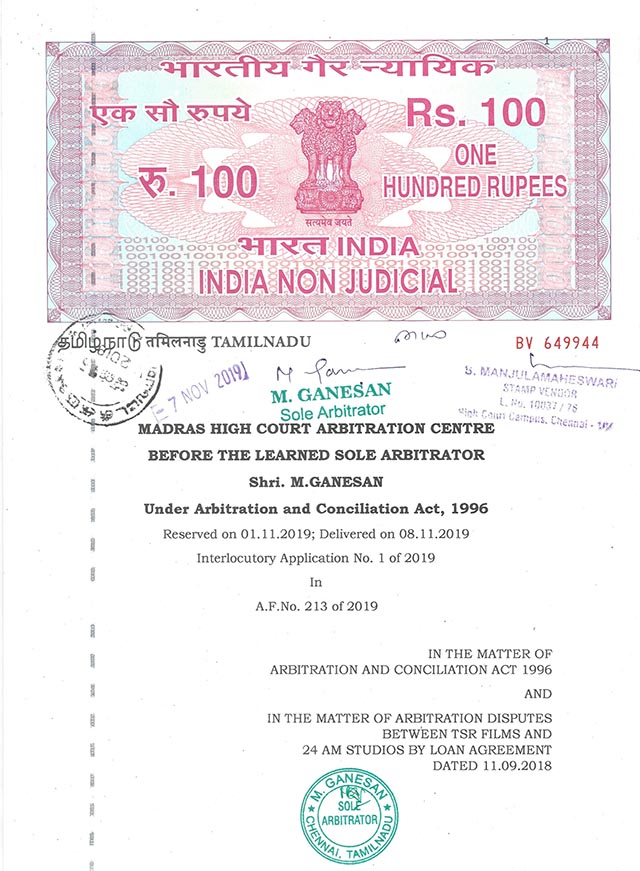 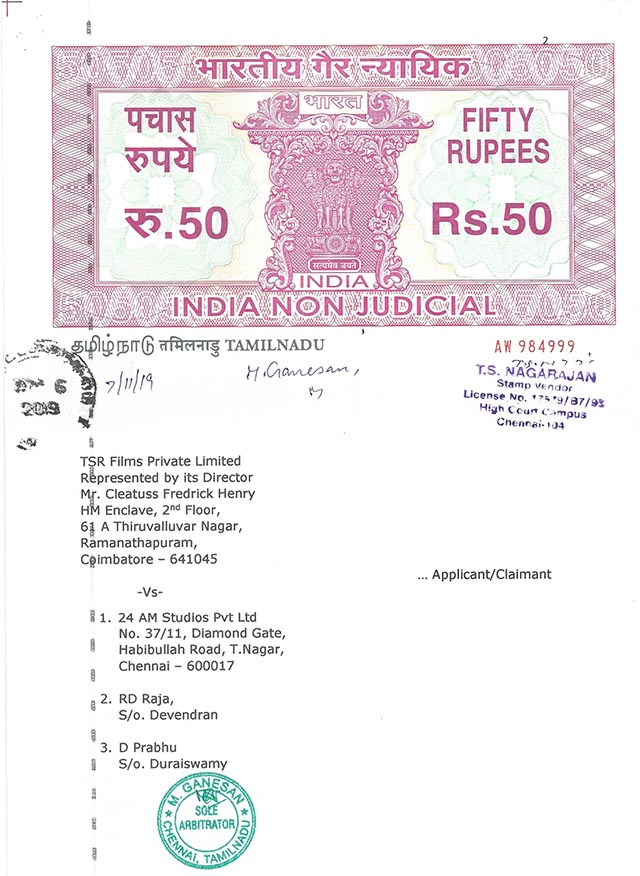 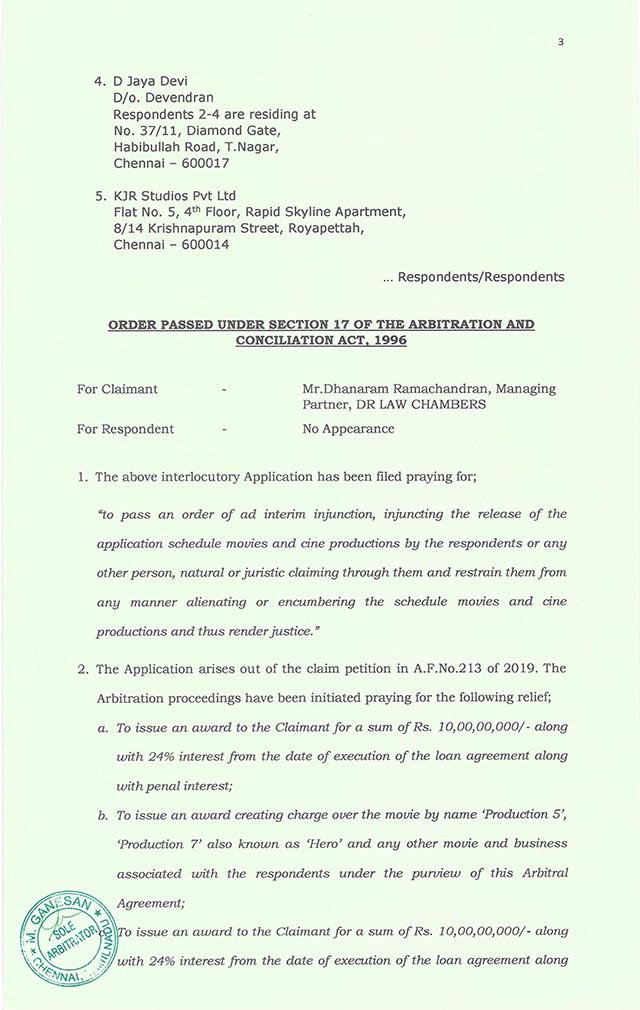 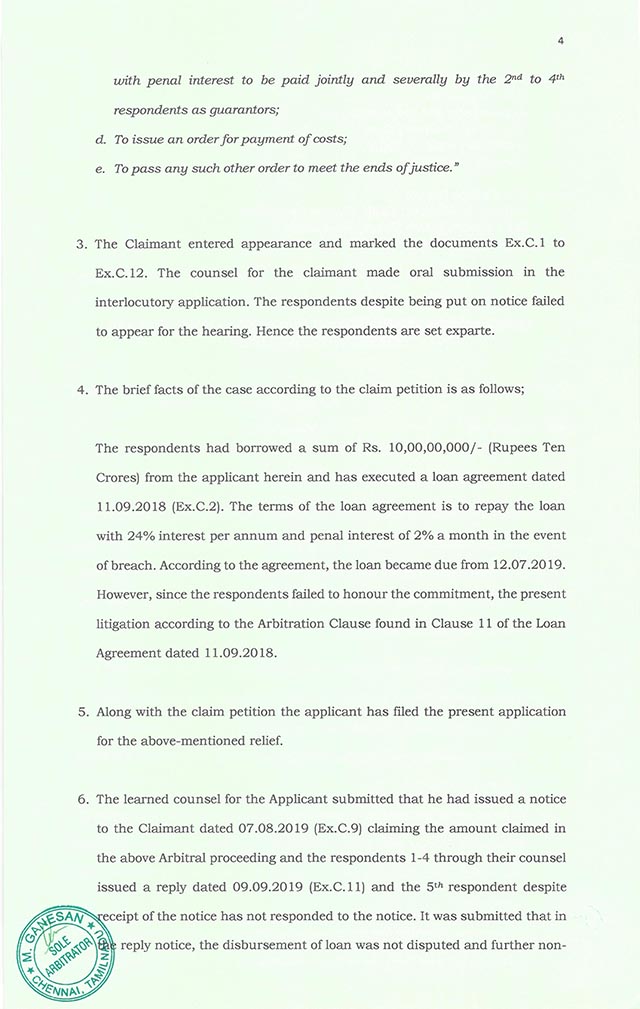 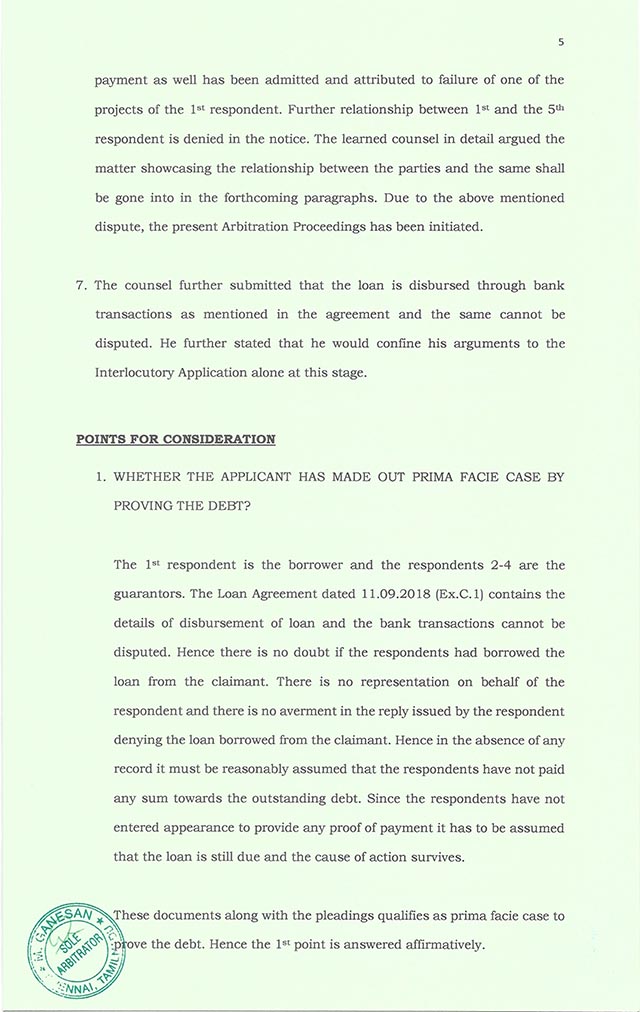 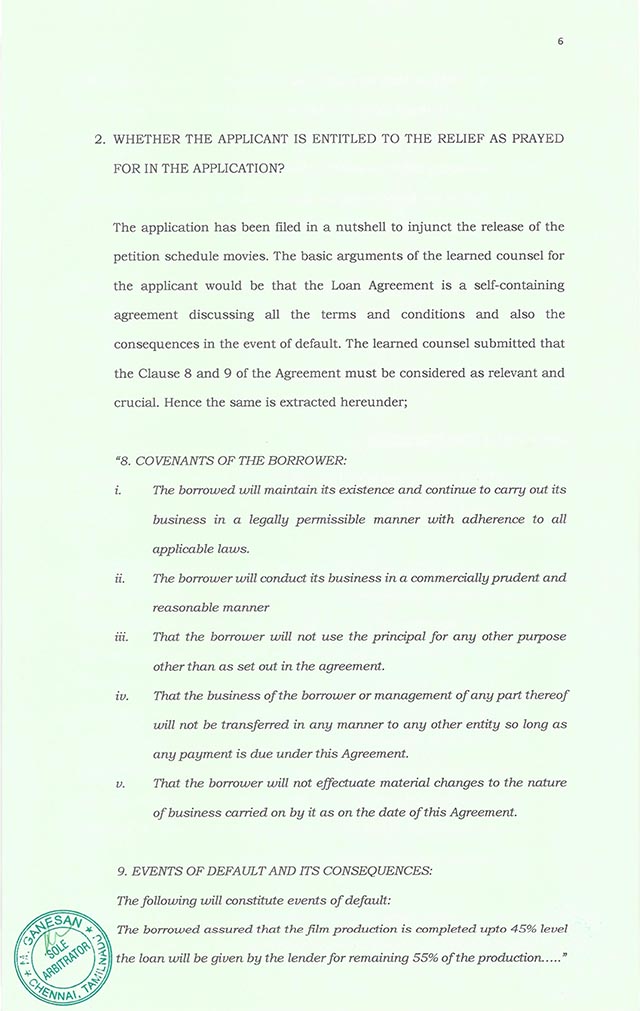 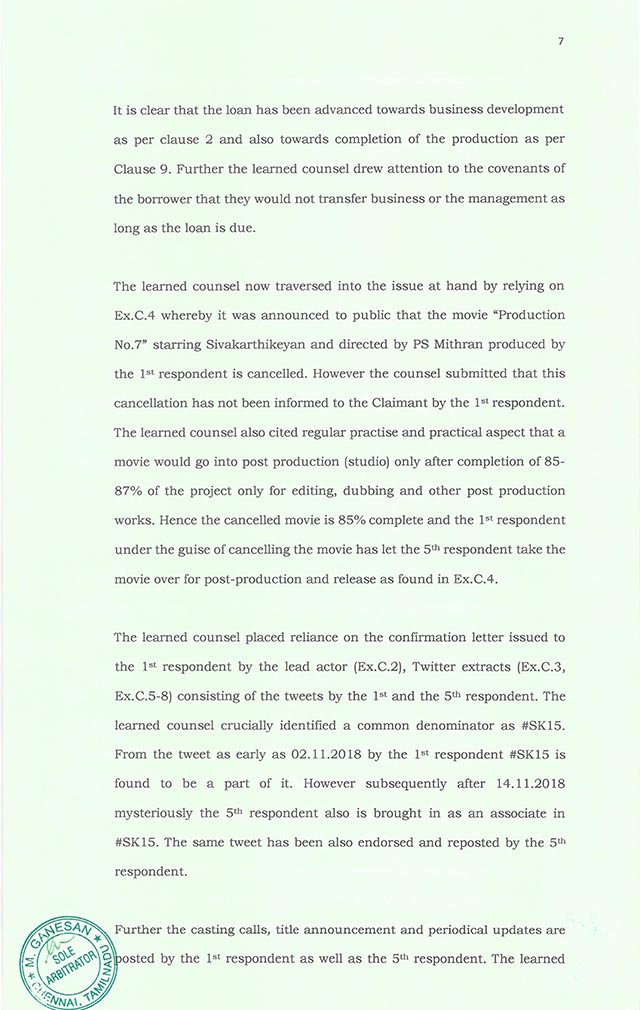 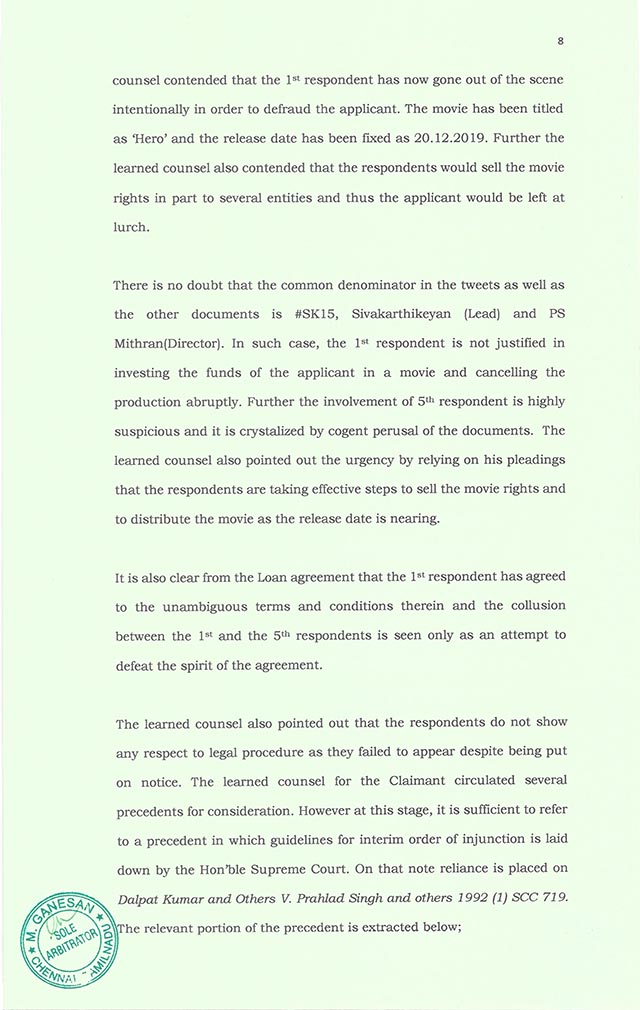 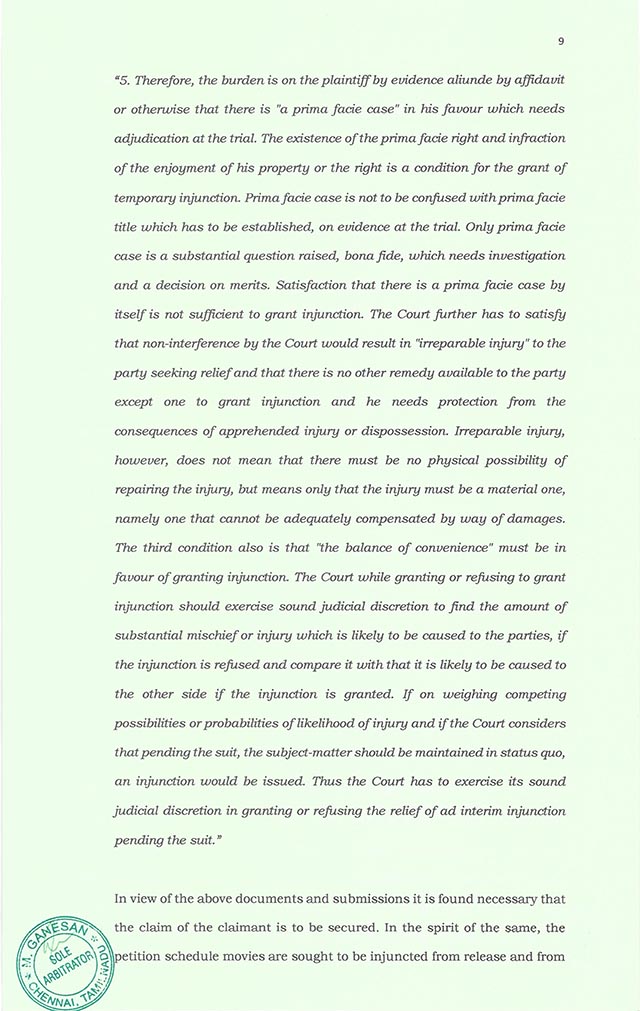 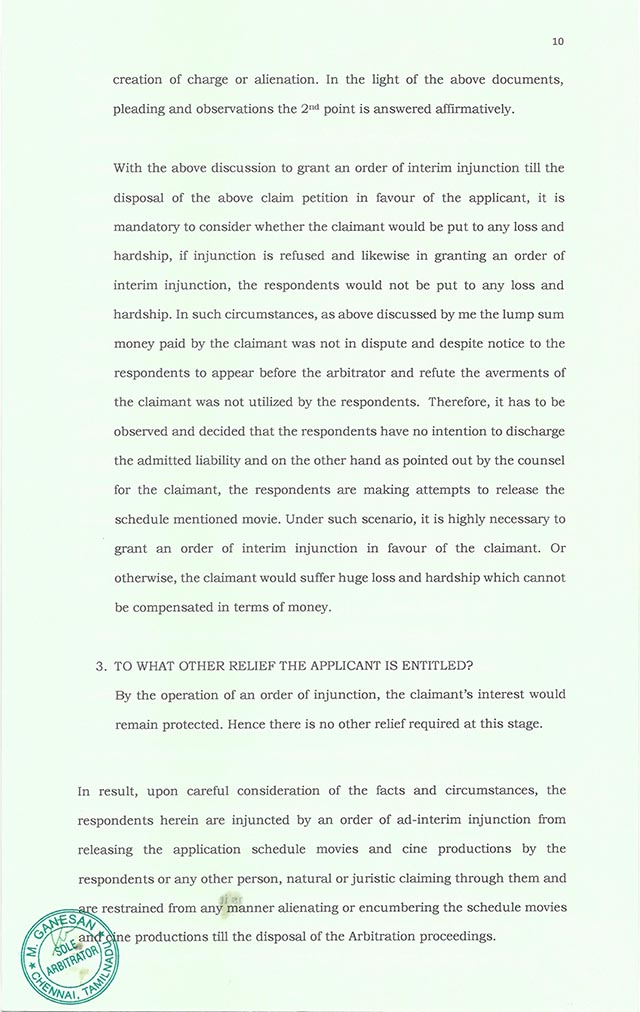 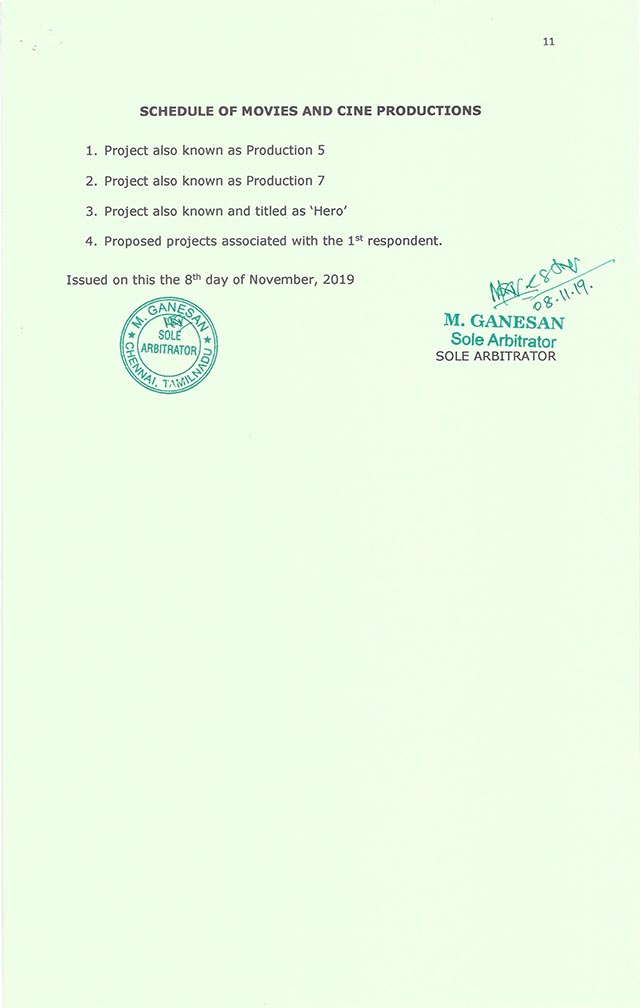 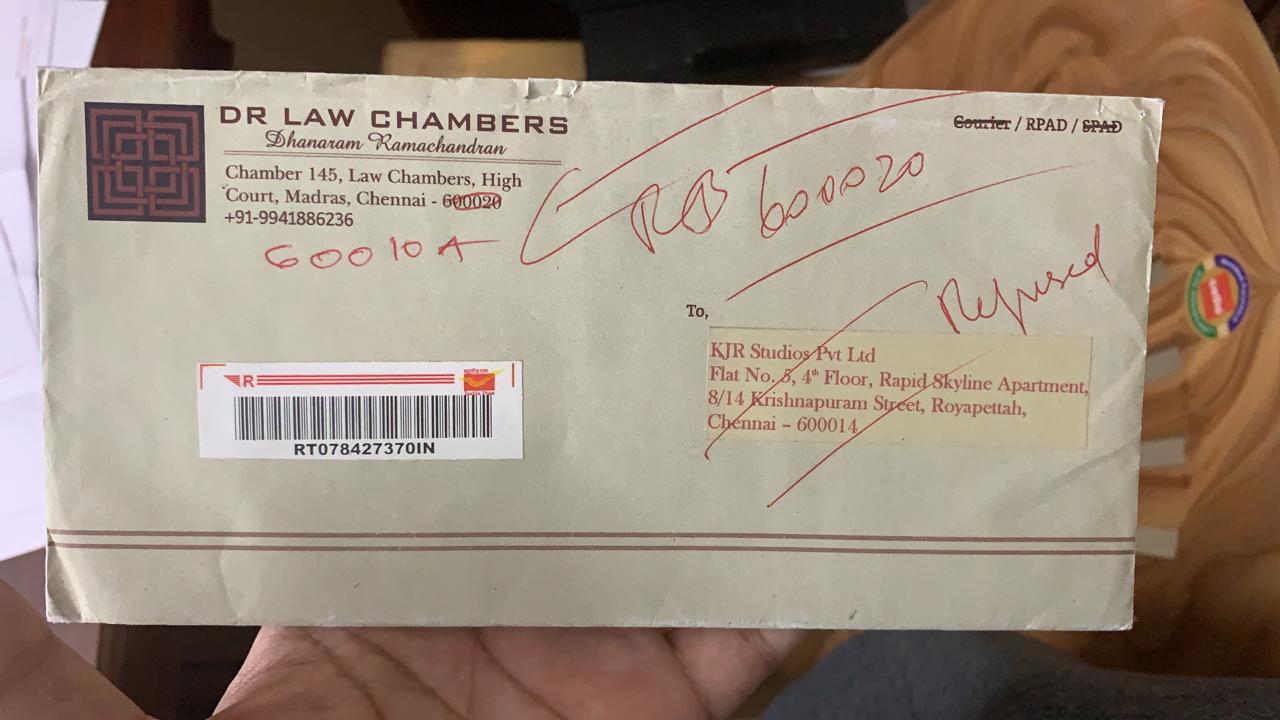