It was Jayalalitha who named me and my daughter! MP shares his experiences with Jaya! 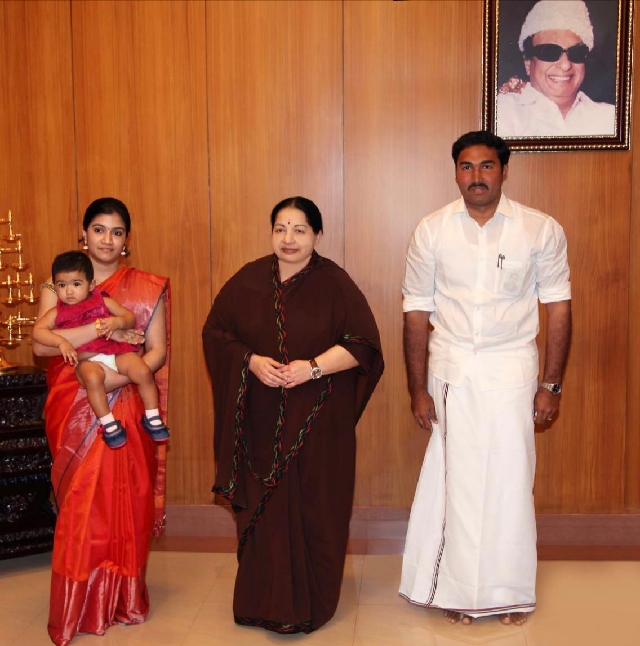 It was on May 29, 1987 a boy baby was born to a politician. He later completed his Medicines degree at a private medical college in Chennai at the age of 22. That doctor when he was born was taken by his father along with his mother to meet Jayalalitha. The politician had requested Jayalalitha to name his baby and Jayalalitha name him. The baby was named as Jayavardhan.

This Jayavardhan was one day called in the year 2013 through his father to meet Jayalalitha the then chief minister of Tamil Nadu. Jayavardhan met Jayalalitha and he was asked whether he would be interested to contest the forthcoming Parliament Election to be held in 2014. He says that he was first shocked when he was called by Jayalalitha and then shocked again when she had asked him about his interest to contest the Parliament election from South Chennai constituency. Once he convey his acceptance on the same, she had ordered him not to share with anyone until it’s been announced officially.

In 2014, Jayavardhan contested the Parliament election from South Chennai constituency and won in it. He was said to be the young Parliamentarian in the whole of India at the age of 25. At this age he hd raised up many issues during the question hour in the Parliament House.

Hope readers would have understood who that Jayavardhan is! Yes it’s our Fisheries Minister D.Jayakumar’s son Jayavardhan. It is to be noted that Jayalalitha was always against family politics and everyone were confused how Jayalalitha had given seat to Jayavaradhan.

Agirl bbay was born to Jayavardhan after he hd become an MP. He along with his wife Swarnalakshmi visited Jayalaitha’s house at Poes Garden and had requested Jayalalitha to name his daughter. He said that Jayalalitha immediately accepted his wish and named her as Jayashree. Jayalalitha while naming the girl baby gave a big laughter and had told them that it was I who named you when you were a baby and now I’m happy to see you coming with your baby and asking me to name her. Jayavardhan added that, Jayalalitha while naming her daughter blessed her whole-heartedly.

Concluding while sharing his experience with Jayalalitha, he said that no one could have had such a lovely opportunity that he had with Jayalalitha. He says that he and his family would be always great full to Jayalalitha.