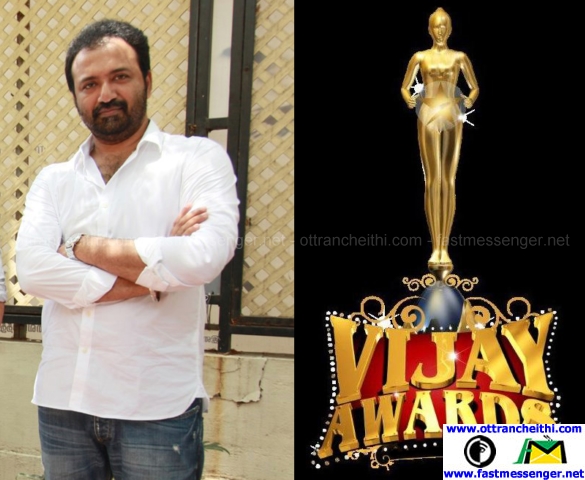 The 9th Annual Vijay Awards is planned to take place today evening at Nehru Indoor Stadium, Chennai. Many celebrities including top personalities like Kamalhassan, Dhanush, Vijay and many others have been invited for the event. Many celebrities have assured to attend. But the mindset of many celebrities including artistes, directors and other technicians have changed in a day with the news that had been published by fastmessenger.net and ottrancheithi.com online news websites.

Comment made by Mahendran against Jaya TV(Owned by associates of ruling AIADMK Party) had reached the ears of top officials of Jaya TV and it is said that they are very angry on Mahendran. Sources say that a team is working to identify the celebrities who are attending the Vijay Awards. Sources say that celebrities who have come to know about the distress of Jaya TV on the comments made by ‘Vijay TV’ Mahendran against Jaya TV are in a confusion whether to attend the 9th Annual Vijay Awards? Few leading celebrities fear that their presence at 9th Annual Vijay Awards may ruin their career, where unnecessary dispute may arise during release of their new films.

In the meantime, news speculate that Mahendran and ‘Auditor’ Shanmugam who are jointly owning a film production company in the name of ‘Next Big Film’have been purchasing many Tamil Films for a lesser price and the same film had been sold out to Vijay TV for a bigger price. Sources confirm that the satellite rights of Vijay directorial “Saivam” had been purchased by ‘Next Big Film’ for a price of Rs. 1.5 crores and the same had been sold to Vijay TV by them for Rs. 2.5 crores. TFPC while meeting top officials of Vijay TV have warned them about the “Saivam” movie issue. Vijay TV officials after gathering the facts explained by the TFPC have ensured TFPC that neither Mahendran nor any of his associates would hereafter deal in purchase of satellite rights of any films. They have also said that they are forming up a committee exclusively to purchase satellite rights of films. Sources also say that the top management of Vijay TV has instructed the committee to clearly investigate about all the films for which satellite rights had been purchased by Vijay TV during the tenure of Mahendran and his associates.

Few colleagues of Mahendran who are against him have escalated this issue to the Top management of Vijay TV. Sources say that serious action may be taken against Mahendran, if he or his associates are been found guilty.