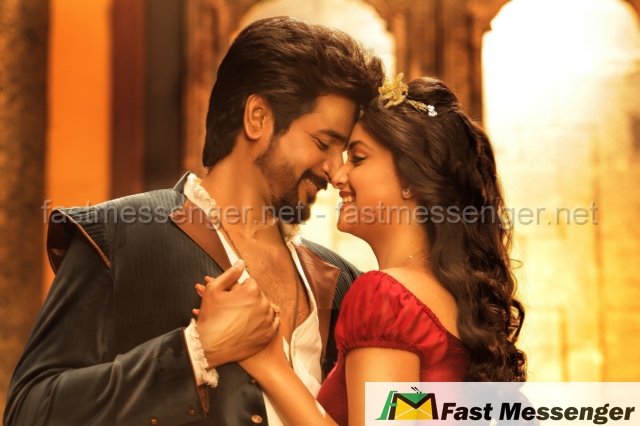 SK(Sivakarthikeyan) who hails from a middle class family is a school dropout and a staunch fan of actor Rajinikanth. His ambition is to become a superstar actor and rule the state. His attempt to become an actor had failed in many circumstances. His friend Sathish and his mother Saranya Ponvannan use to tease him that he is incapable of doing romance either in real life or in his reel life. In one scenario Sathish tries to impress a girl passing on a road and blows are being exchanged by Sathish and Yogi Babu who was another one who was about to approach the same girl. SK intervenes in this matter in support of Sathish. Later Siva comes to know that Yogi Babu had to attend an audition at Director K.S.Ravikumar’s office, the next day. Siva attends K.S.Ravikumar’s audition and fails in it and was able to earn the teasing of the director.

One fine day, SKa happens to meet Kavya(Keerthi Suresh) and immediately falls in love with her. When he later approaches to convey her about his love on her, Kavya let him know that she has been already engaged. Disappointed SK again approaches K.S.Ravikumar requesting for an acting chance. Ravikumar informs him that he would need a person who could perform with a female getup, since he was about to direct ‘Avvai Shanmugi – Part 2’.

Frustrated SK keeps approaching Kavya to convince her with his love and she keeps refusing and warns her. Here enters Regina Motwani(Remo) as a nurse. Remo who is already aware about SK’s love on Kavya meets her in a bus when REMO is being teased by some guys. Here Kavya and Remo become close friends. Kavya who is a Doctor by profession gets a nursing job for Remo in the hospital she works. Remo starts indirectly advising Kavya about the advantages of love marriages and suddenly involves SK and his love on Kavya.

The remaining part of the movie is whether Kavya takes up Remo’s words! Whether SK keeps approaching Kavya!! Whether Kavya accepts or refuses SK’s love!!!

Transformation of Thugs as farmers! –…

The debutante female actress I have earlier mentioned is none other than Sivakarthikeyan. Its SK who puts up a drama and plays the character of Remo to fulfill his love on Kavya.

Appreciations: Sivakarthikeyan has to be appreciated dedication on his acting performance and makeup for the female character Remo. Upcoming heroes would avoid taking such risks to act in characters like Remo in a full length movies. Costumes and makeup aptly suited for Sivakarthikeyan’s Remo character. Director Bakiyaraj Kannan has initiated giving importance to comedy to keep the audience engaged in laughter. ‘Remo’ character would be year marked in Sivakarthikeyan’s acting career. Keerthi Suresh acting keeps natural. In a scene where a dispute arises between her and SK, he act on screaming with dialogues seems to be natural. She steals the scene there! Anirudh on his music and P.C.Sreeram on his cinematography have done justice to their works. K.S.Ravikumar has done as K.S.Ravikumar. Yogi Babu’s appearance keep the audience laugh on every scenes of his. Sathish acting as the same in his earlier movies as a hero’s friend.

Flaws: The duration of the movie seems to be a little lengthier. Logic seems to miss in various scenes. The pace of the story lacks in few places. Director Bakiyaraj Kannan should engage little more hard, on screenplay and story for his next movie.

Review & Suggestion: Movie can be watched with family. Sure shot audience would not disappoint spending for the ticket, because the money spent for ticket is worth watching. An another Box-office movie of Sivakarthikeyan.

Sivakarthikeyan in UAE for ‘Remo’ promotions: