Sivakarthikeyan in UAE for ‘Remo’ promotions: 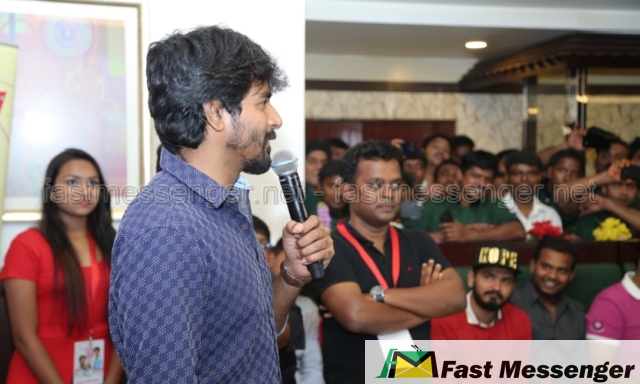 Actor Sivakarthikeyan, visited the UAE for the first time on a fan visit to promote his romantic comedy film, Remo. The film is all set to release worldwide on October 7, 2016, and has already taken the world by storm after its intriguing trailers and promos.

Remo is a film written and directed by Bakkiyaraj Kannan. The film music is composed by Anirudh, while the Cinematography is by P.C.Shreeram. This is second movie Sivakarthikeyan has paired with Keerthy Suresh. He plays a dual role with a twist, where he plays both, a man and a woman. The movie is all set to enthral audiences across the world, having already gotten a significantly large number of screens.

While in the UAE, the promos comprised an on air radio promotion in Tamil, on 89.4 FM from 9.30 -10.30 am on October 5. He was also at the Travel Wings @Business Bay for a press meet from 11:00 AM to 1:00 PM, and then went to Black Tulip Flower in the Al Nadha Industrial Area 7 Behind Al Safeer Mall, Sharjah. This was the most coveted and most awaited part where his fans had the chance to meet him and get a rose from him! The Tamil 89.4 FM team was present during the event, as the crowd of over 250 people were extremely excited at the sight of their favourite actor. Sivakarthikeyan wrapped up his fan engagement with a Gala Night Meet and Greet at the Aappa Kadai Restaurant at Karama Dubai, followed by “Dinner with Actor”.

The film is to be released by Golden Cinemas and marketed by FTP Advertising LLC, in association with Sparkle Dental Care, AP International, Ayngaran, Phars Films & United India Exporters.