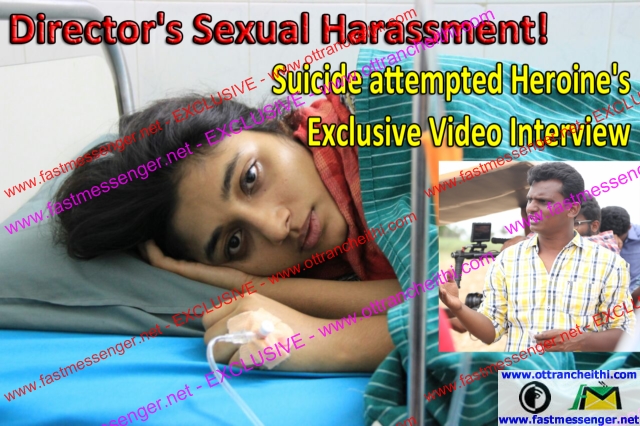 On 29th Septermber 2016, actress Aditi(alias) Adhira Santhosh attempted to suicide by consuming poison. Aditi is a debutante actress whose first movie is “Nedunalvaadai”. The movie is under production and is being directed by Selvakannan who is a debutante director. According to the statement given by Aditi, she accuses Selvakannan of sexual torture, sexual harassment, life threat and had also attempted to kill her. Aditi who was committed to act as a heroine in the movie was initially treated well by the director and the movie crew, later she was been given a love proposal by Selvakannan and it seems Aditi has refused to accept it. It is said that Selvakannan who was disappointed by Aditi’s reply had started to misbehave with her verbally and physically. She admits that in one situation she had even hit him with her footwear.

Aditi’s anger against Selvakannan had made Selvakannan upset and this could have forced him to be more wild against Aditi. She complains that her cellphone and other belongings were also been taken into custody by Selvakannan even during late hours when she had even completed that days shoot. She adds that Selvakannan had pressurised her to emphasise his love towards her. In one point of time, Selvakannan who had become wild on hearing her reply had forcefully hold her neck and dashed her on to the wall and he has shouted that he would kill her.

Aditi complains that few days ago Selvakannan along with 20 to 30 persons had walked into a shooting spot where Aditi had been performing and abused her in public and hit her and her friend and forcefully pulled her into an auto. Later on a telephonic complaint made to the police by her fried had helped her to be rescued from Selvakannan and his associates. She also adds that the complaints had been given by her to the Police, Chief Minister’s Cell, South Indian Film Artistes Association(SIAA), Tamil Film Directors Union(TANTIS) and to the Tamil Film Producers Guild. It seems police who enquired into her issue were biased and in favour of Selvakannan. Directors Union President Vikraman had informed her that since she is a non-member of the directors union, her complaint could not be considered. She had received the same reply from the SIAA, but its Secretary actor Vishal had said that he would do his level best to intervene in this issue to get a amicable solution in this regard. Representatives of Nadigar Sangam have also visited the hospital where Aditi had been admitted and they had given Aditi a satisfactory response says Aditi. Reliable sources say that Aditi fearing about her life has voluntarily discharged from the hospital she is admitted and rushing to her home state Kerala seeking protection.

One thing makes clear that though its has passed 69 years after Indian had attained Independence, security for women is still a question mark. It is to be noted that many young girls are either being raped, murdered or raped and murdered often. Lets expect Police Department, Women & Child Development initiate necessary action to enquire regarding this issue and proceed further for necessary legal action.

Below is the video footage of our “Fast Messenger” team interview with actress Aditi (alias) Adhira Santhosh: