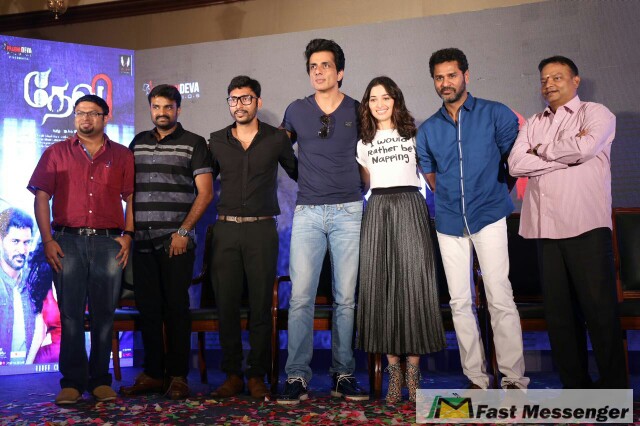 Prabhudeva who lastly appeared on Tamil Silverscreen through “Engal Anna” in 2004 as a actor moved to Telugu and Hindi as an actor. Later he directed few films in Tamil, Hindi and English.

Now Prabhudeva is again into Tamil film industry as a actor. He has now acted in a Trilingual film titled “Devi” in Tamil, “Tutak Tutak Tutiya” in Hindi and “Abhinetri” in Telugu. Tamannaah Bhatia is playing as the female lead in the movie. Sonu Sood is playing a important character in the movie. Gopi Sundar has done the background music, while Manush Nandan has handled Cinematography and Anthony had taken care of Editing. The movie has been directed by Al.Vijay and produced on behalf of Prabhudeva Studios by Isai K.Ganesh and Prabhudeva.

Pradbhudeva, Tamannaah Bhatia and Sonu Sood along with Director Al.Vijay and Producer Isai K.Ganesh met the media persons yesterday in a private hotel to brief up about the movie. Prabhudeva said, “I used to debut continuously in different department and different languages. After 12 years I have acted in Tamil movie through ‘Devi’. It’s happy to act along with RJ Balaji.” said Prabhudeva.

“Devi” Trilingual movie is releasing worldwide in Tamil, Hindi and Telugu together on October 07, 2016. Tamil version titled “Devi” is being released by Auraa Cinemas.