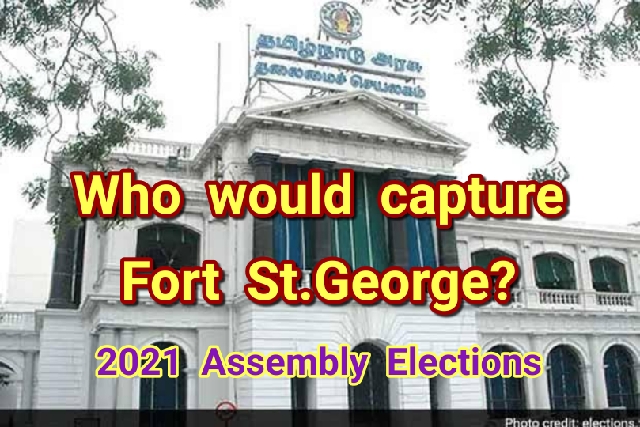 The tenure of the current ruling AIADMK government in Tamil Nadu with the Chief Ministership of Edappadi K Palanisamy is getting completed by May 2021. Hence the Assembly elections for the Tamil Nadu state is expected to happen in the month of May 2021.

For the past five decades, it was either Dravida Munnetra Kazhagam(DMK) or All India Anna Dravida Munnetra Kazhagam(AIADMK) who have been ruling Tamil Nadu. Both these parties who have been ruling Tamil Nadu for these many years have been alleged with corruption and few other charges. Late. J.Jayalalitha along with her close aide Sasikala and few others were convicted with corruption charges. Since Jayalalitha deceased due to ill health before the judgement was awarded, her close aide Sasikala and others were sent to prison.

After the demise of Jayalalitha, Edappadi K Palanisamy was made as the Chief Minister of Tamil Nadu after a big drama that took place at Koovathur(a place on the outskirts of Chennai) Resort.

The earlier ruled DMK government was alleged for the notorious domination of Satellite channels and Film industry by Maran brothers and Katta Panchayat and illegal land grabbing activities by party members especially in the real estate field. This unlawful activities carried out by DMK men made them loose their power to AIADMK in the 2012 Assembly elections. AIADMK continued to rule from 2012 till date.

Though the now ruling AIADMK is not perfect or corrupt free, people compare AIADMK is little better than DMK. The main drawback AIADMK is currently facing is because, the government acts only with the control of BJP ruled Prime Minister Narendra Modi and Home Minister Amit Shah. During the protest by the people of Thuthukudi against the Sterlite Industry, innocent public were shot dead by the police. Many innocent farmers were brutally attacked by police men when farmers went on a protest against the central government to stop the plan for the Eight Lane Road from Chennai to Salem. State ruled AIADMK government did not fully object on NEET. All this happened, since because AIADMK has been alleged by the people of Tamil Nadu for being hand in glove with the BJP ruling central government. In the recent Farm Bill 2021 been published, farmers in whole have been objecting it and many state governments have been supporting the farmers and it’s very bad to see Tamil Nadu Chief Minister Edappadi K Palanisamy being a silent spectator.

Since AIADMK and DMK have been badly alleged with many corruption charges, people of Tamil Nadu opted for a optional party to rule Tamil Nadu and Rajinikanth was the most expected leader to float a new party. But the sad part is Rajinikanth who had been saying to float a new party since 1996 has till date not yet started a new political party. Few days ago, he had announced that he would be starting a new political party and the same would be announced on December 31 of this year. He has also said that his party would surely contest in the Tamil Nadu Assembly elections scheduled to be held in May 2021.

Kamalhassan who was always spoken to be away from politics suddenly launched his new political party named as Makkal Needhi Maiam(MNM) on 21st February 2018 at Madurai. MNM party contested in the Lok Sabha elections and lost in all the constituencies it contested and failed to gain even the deposits. MNM party was able to secure around 0.26% of votes in average out of all the constituencies it had contested.

Tamil Nadu which is being ruled by Dravidian Parties for the past five decades is now loosing it’s confidence among the public due to their inefficiencies. The reason for it is the loss of the two leaders Kalaignar K.Karunanidhi of DMK and J.Jayalalitha of AIADMK. The voice of these two leaders either in power or not were given importance by all the political parties in state and national. The Prime Minister and central government used to lend their ears to listen to their voices. But the voices raised by AIADMK or DMK leaders don’t receive proper response from the BJP ruling central government.

BJP which had earlier won single digit seats in Tamil Nadu, was only with the support of its dravidian alliance partners. In the 2017 R.K.Nagar assembly by-election, it lost very badly securing votes less than the count of NOTA. This gave a bad remark on BJP and the state leaders were paraded by the Headquarter chiefs.

BJP loosing in the R.K.Nagar by-election, thought the headquarter with a lesson to concentrate in Tamil Nadu. Tamil Nadu BJP leaders were instructed to go on a propoganda defending the allegations carried out by the opposition parties against the ruling BJP. BJP engaged many youngsters into social media to propagate positively about the activities carried out by the BJP ruled central government. The state government and central government offices in Tamil Nadu were instructed by BJP headquarter to give importance to their state cadres. BJP cadres who were very meagre and not walked into any local offices also started to wear BJP flag coloured dhotis and saffron shirts and walked into government offices and police stations in support of any individual for their work getting completed. Later the state BJP cadres getting the full support from the center, started dominating in government offices and police stations as like DMK & AIADMK does.

Few years ago, where a protest was carried out by BJP in Tamil Nadu, there use to be cadres countable in single digit or a maximum of 20 persons. Now BJP with its central ruling power has laid its strong foot marks in the soils of Tamil Nadu. It is now demonstrating protest with three digit crowd. Tamil Nadu BJP has new members from government services and film industry. S.Ve.Shekar who was earlier with AIADMK and later Congress joined BJP few years ago. Actor Radharavi who is alleged on cheating charges in South Indian Artistes Association(SIAA) and Dubbing Union travelled with DMK, MDMK, AIADMK and recently joined BJP. It is to be noted that Radharavi has been seriously alleged of sexual harassment chrages by few women members of the Dubbing Union and till date BJP has never bothered about it. Actress Khushboo who was in DMK later joined Congress and now has joined BJP. Selvam an MLA from DMK, Saidai Duraisamy and few others from DMK and other parties have joined BJP. Tamil Nadu BJP already has few film producers, directors and junior level film celebrities in it. BJP is on a serious hunt for top film celebrities to make them join in their party. BJP tried a lot by making Rajinikanth join BJP and it failed. But rumours speculate that Rajinikanth is starting a new party only with the guidance of BJP and would be an indirect co-party of BJP. This speculation confirms since Tamil Nadu BJP’s Intellectual wing head Arjun Murthy has joined Rajinikanth and he has been posted as Organiser of the political party which has not yet been started.

Many film celebrities and bureaucrats have already joined Kamalhassan led MNM party and his first election propaganda has started at Madurai yesterday.

We can watch more dramas on alliance for the 2021 Tamil Nadu assembly elections. Let’s wait and see whether it’s Dravidian parties or the other parties going to capture Fort St.George.