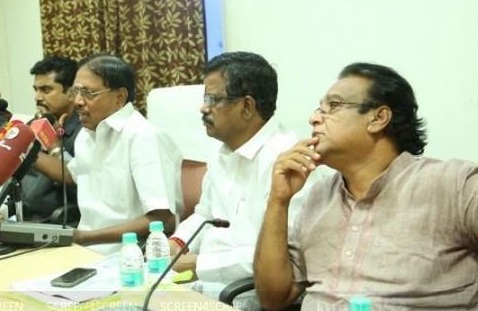 But today, Tiruppur Subramaniam along with Kalaipuli.S.Thanu, President of Tamil Film Producers Council and Sarathkumar, President of South Indian Artistes Association met the media. Tiruppur Subramaniam who addressed the media explained that Rockline Venkatesh had paid only Rs. 6 crores and the same had been paid to the loss affected distributors and exhibitors. He also added that the balance amount from Rockline Venkatesh has not been received by them, since Rockline Venkatesh was busy with his son’s marriage. He confirmed that the balance amount would be received by them soon from Venkatesh and the same would be settled to other loss affected distributors and exhibitors.

He declined giving any commitment about Rajnikanth’s call sheet to Singaravelan or any one else. He said, “I never spoke about Rajnikanth’s call sheet”. He added that Rajnikanth had requested him to intervene in settling the financial dispute arisen between the “Lingaa” distributors and the Producers in regard to the loss incurred through releasing the movie. He alleged that it was Singaravelan who had requested only for a part payment and went off signing a document with Thanu mentioning that he would not interfere in this regard and requested them to settle the balance amount to other affected distributors and exhibitors. Tiruppur Subramaniam confirmed that the “Lingaa” issue would be over in few days after they receive few details of accounts from few distributors and which is expected to be received in a day or two.

But as far as we have analysed the “Lingaa” issue is still not complete. News is speculating that a meeting is said to happen on 3rd June 2015 within the loss affected distributors and exhibitors in the presence of few producers and Exhibitor Association office bearers.

It is still a question mark, Is the “Lingaa” controversy over?