Tamil Film Fraternity in support of “Komban” movie. Warning to such threatening protesters? 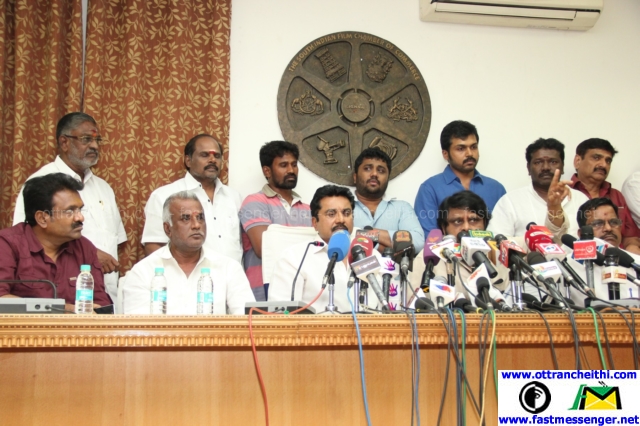 Today evening, many members and office bearers of the entire Tamil film industry union assembled together at Film Chamber office addressing the media pertaining to their support over the issues raised against the Tamil film ‘Komban’ hitting screens tomorrow (April 1, 2015).

Speaking on the occasion, Kalaipuli S Dhanu, President of Tamil Film Producers Council said, “These days, making a film and getting it released has become a speculative task. We have only 10% confidence over the film’s favourable result and it’s a bleak scenario as everyone knows. But what turns to be more speculative is the process of getting it censored that becomes a huge burden than making a film. It’s almost like a woman in labour pain. Moreover, it adds an unbearable pain, when an individual or a group much prior to the film’s release or without viewing it comes up with problems that hassle everyone’s expectations. At this critical juncture, we as the members of Tamil film fraternity come together pleading everyone of this group not to trouble us with unwanted issues. We all watched ‘Komban’ before meeting you all and it has a beautiful family element revolving around mother-son, father-daughter and in-law relationship. It gave an immense pleasure and experience of the same impact we had in ‘Kizhakku Simaiyile’. Personally, I feel the film doesn’t have any significance or problems of depriving or degrading any particular individual, group or community. Henceforth, there is no such need to raise an unwanted hurdle for the film and we make this request as a family of film industry.”

Director Vikraman, President of Tamil Film Directors Union on his part rendered, “I have watched the film and I don’t sense anything relevant to the issue that has been raised unwantedly. And I am sure, you are going to watch and experience it. If you come across any such elements that deprive or degrade any social communities or groups, I promise to walk out of the industry and would never make a film forever.”

Mr. Sarath Kumar, President of South Indian Cine Artists Association on his part uttered, “It’s ridiculous to witness such issues being raised and it is completely irrelevant to the film. No one has the right for any individual or group parties to show objection over a film that has obtained censor certification. CBFC is a Central Government wing that has its own ethics and procedures to view and certify a movie. Such kind of issues poses a threat to the same committee of censor board, where their roles are questioned through such activities by an individual or a group. We, everyone from the Tamil film fraternity would be working against such issues of safeguarding the rights of each and every member. If any individual or a politician raise voice to Ban a movie after the Film Certification, I don’t think that there is a necessity for a Film Certification body to function. If that is the case, a movie can be certified by the politicians or objectors of their own and that is not possible.”

On a question raised to K.E. Gnanavel Raja of Studio Green, if he has any personal conflicts with the Politician Dr.Krishnasamy who has been responsible for the ongoing issue with “Komban”. He gave a reply saying, “We have never met before and I am really wondering how it could be possible for someone to see an unreleased film and bring out such issues. To be frank, if at all I need to watch the movie, I have to watch only with the concern of the Director and not of my own.”

This unity within the Tamil Film Fraternity in support of “Komban” movie has come as a warning to the protesters threatening for unauthenticated reasons and publicity mileage? Hope the Government and Judicial Department initiate stringent action on individuals, political parties or any organizations who unnecessarily threaten the producers, director and the crew of any movie for no reasons and only to gain publicity.

Other present during this press meet were Mr. Radharavi, Secretary of South Indian Cine Artists Association, Actor Karthi, Director Muthaiah, Actor Karunaas, CV Kumar of Thirukumaran Entertainment, T. Siva of Amma Creations, Radha Krishnan and many others from the film chamber were present.