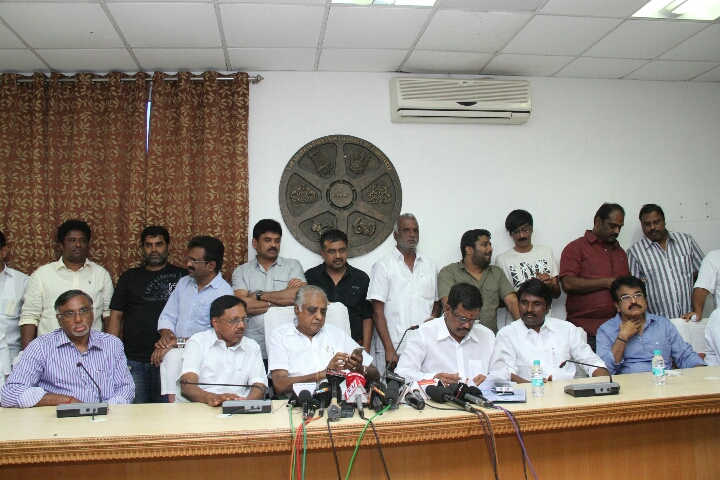 Today various associations of Tamil Film Industry gathered at the hall of South India Film Chamber of Commerce.  The associations after joint meeting addressed the media to announce the release date of Kamlhassan starring “Uttama Villan”.  Director Lingusamy who is the producer of the movie ” Uttama Villan”while addressing the media said that he had heard that someone from a movie association had threaten their company persons and had been demanding an exorbitant amount. He also added that the person had threaten if the demanded amount had not been paid to them a ‘Red card’ would be passed against the movie to stop the release. He said that he had instructed his production team not to agree for their demand and take the issue to the Tamil Film Producers Council (TFPC).

Lingusamy said that the matter has been reported to all associations and they have agreed to support us for releasing “Uttama Villan”. As a token of rendering the support all association had assembled here to address the media, said Lingusamy.

Kalaipuli S. Thanu, President of  TFPC and Abirami S. Ramanathan, President of Chennai Film Exhibitors Association while addressing the media said that they are very much supporting Tirupathi Brothers and ” Uttama Villan” team for their movie release.

News had been speculating from 10th April after a meeting of Tamil Nadu Film Exhibitors Association (TNFEA)that took place at Woodlands Theater in Chennai that Rohini Pannerselvam, Secretary of TNFEA had demanded Subash Chandra Bose of Tirupathi Brothers to pay Rupees Fifty Lakhs for him personally and Rupees Fifty Lakhs for their TNFEA.  Subash Chandra Bose who was shocked about Pannerselvam’s demand, had negotiated with him and had finalized for Rupees Seventy Lakhs and an advance of Rupees Twenty Five Lakhs is said to be paid.  Sources say that Pannerselvam after taking Twenty Five Lakhs has been pressurising for the balance amount. This pressure had irritated Subash Chandra Bose and had reported the same to his Film fraternity friends and few top persons of Film associations. Sources also say that the reason stated to Subash to Pannerselvam was that he and TNFEA have incurred huge expenses for facing the case filed by Kamalhassan with ‘Competition Commission Of India’  (CCI) against them on “Viswaroopam” DTH issue.  To undergo these expenses, Pannerselvam is said to have made this monetary demand with Subash Chandra Bose.

Sources also say that Kalaipuli S. Thanu who had intervened in this issue had gone along with Subash Chandra Bose to meet Pannerselvam at Rohini Lodge in T.Nagar to find a solution for the issue. But sources say that Annamalai, President of TNFEA had snubbed Thanu and Subash by banging the door where Pannerselvam and Annamalai where present.  It is said that Pannerselvam had returned that Twenty Five Lakhs and had issued a threat that TNFEA would be issuing ‘Red card’ for the film “Uttama Villan”.

On a question to Tiruppur Subramanian, member of Exhibitor association about the issues occurred on 10th April during the TNFEA meeting, he refused to comment about it.

On a question to Kalaipuli S. Thanu for being Ill treated by Annamalai of TNFEA, he replies that he was not ready to answer for any rumors or assumptions and winded the meeting by announcing the release date of Kamalhassan starring “Uttama Villan” as May 01, 2015.