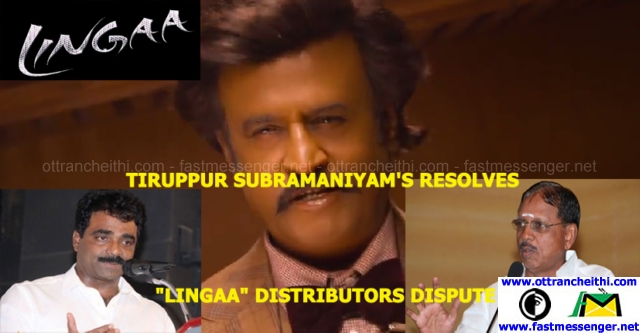 In this issue, Tiruppur Subramaniam, a distributor was said to be nominated by Rajnikanth to mediate between the distributors, exhibitors and the Producers of the movie to settle the dispute. In one stage Kalaipuli S.Thanu, President, Tamil Film Producers Council(TFPC) along with other officer bearers and Tiruppur Subramaniam addressed the media and said that an amount of Rs.12.5 crores has been agreed by Rockline Venkatesh and Rajnikanth to pay in total as compensation to the loss affected distributors and exhibitors. In which Rajnikanth has accepted to pay Rs.6.5 crores and Rockline Venkatesh had accepted to pay Rs.6 crores as compensation to those affected distributors.

In one stage distributor Singaravelan accused Tiruppur Subramaniam and Kalaipuli S.Thanu stating the reason that Rockline Venkatesh and Rajnikanth had paid them an amount of Rs.12.5 cores and a part had been paid to the loss affected distributors and the remaining had not been settled to them. Press meets were addressed various times in this regard by distributors & exhibitors and TFPC and the solution was not over.

Sources say that two day ago a meeting had been held at the office of TFPC to make an end to the “Lingaa” distributors controversy. It is said that C.Kalyan, former President of South India Film Chamber of Commerce, Arulpathy, President of Distributors Association, Katrakara Prasad, Kalaipuli S.Thanu, President, TFPC, Kathiresan, Vice President, TFPC, Radhakrishnan & T.Siva, Secretaries, TFPC, T.T.G.Thiyagarajan, Treasurer, TFPC, Vendhar Movies Madhan, Rockline Venkatesh and Tiruppur Subramaniyam had participated in the meeting. It had been declared that Rajnikanth had paid Rs.6.5 crores as committed by him and the balance amount payable by Rockline Venkatesh had not been settled then. Sources say that Rockline Venkatesh had explained about his inability to pay Rs.6 crores and had accepted to pay only Rs.4.75 crores on his part. The balance amount of Rs.1.25 crores was a question mark who would settle it. At last it is Tiruppur Subramaniyam who has said that he had released many film of Rajnikanth and had made profit out of those earlier films. He also added that he did not wish to Rajnikanth to be troubled again in this issue and volunteered to pay that deficit amount of Rs.1.25 crores payable to the loss affected distributors of the movie “Lingaa”.

Tiruppur Subramaniam’s surprised initiative to settle the deficit amount of Rs.1.25 crores, is said to have received appreciations from those in the meeting and in the film industry.