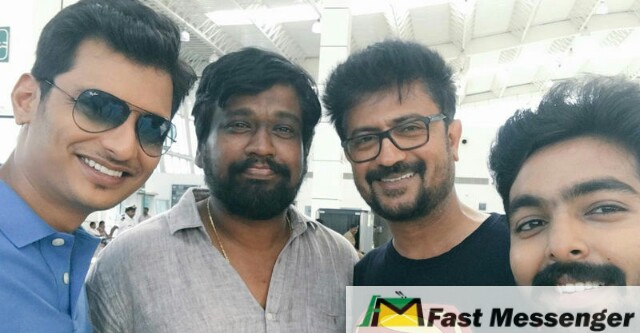 Director M.Rajesh who had earlier directed ‘Siva Manasula Sakthi’, ‘Boss Engira Baskaran’ are few more movies were said to have reached in the list of box office hits. He is currently directing ‘Kadavul Irukkan Kumaru’ starcasted by G.V.Prakashkumar, Nikki Galrani, Anandhi, Manobala and few others. The movie is being produced by T.Siva for Amma Creations.

The movie is currently in its final stage of shoot. Rajesh use to utilise any of his previous movie heroes to play a cameo role in his movies, where Arya had earlier played a cameo in ‘Siva Manasula Sakthi’ and Jiva played in ‘Boss Engira Baskaran’.

Now Rajesh has again roped in Jiva to play a cameo in ‘Kadavul Irukkan Kumaru’. This information has been shared by G.V.Prakashkumar on his official Twitter account.

The movie has been planned to be released worldwide during this Deepavali festival season.

Vijay Antony’s Saithan teaser goes offline! Would be back in a day with corrections in lyric!!