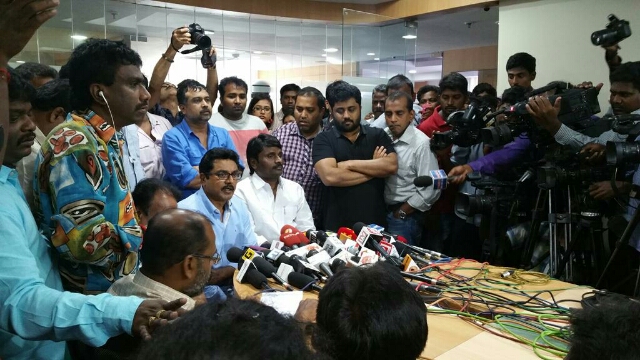 Kamal Hassan starring “Uttama Villain” directed by Ramesh Arvind and produced by Tirupathi Brothers was scheduled to be released worldwide on May 01st. But due to some financial dispute the release of the movie was not dine as scheduled. But the movie had released overseas and had gained positive response.

After a continuous struggle for more than than 24 hours the group managed for an amicable solution and called for a joint press meet at the Chennai Office of EROS International.

Sarathkumar, Lingusamy and others who addressed the press meet said that the problem has been amicable solved and the movie would be released  today by 1:30 pm in all theaters that had been scheduled earlier. Sarathkumar also added that there was no political interference in regard to the delay in the release of the movie. He said that it was delayed only because of some financial constrains and disputes regarding it and the same has been resolved. Lingusamy expressed his thanks to all who had supported for helping the movie to get released. He marked his special and heart felt thanks to Gnanavelraja and Madurai Anbu for their major part in helping him in getting the movie release.

Altlast “Uttama Villain” is hitting theaters to satisfy the fans of Kamal Hassan who had been waiting eagerly for months together.

The next girl ghost, is on the way to hit screens through “Ullam Ullavarai”:

“Bheem is back at Chennai Forum Vijaya Mall: