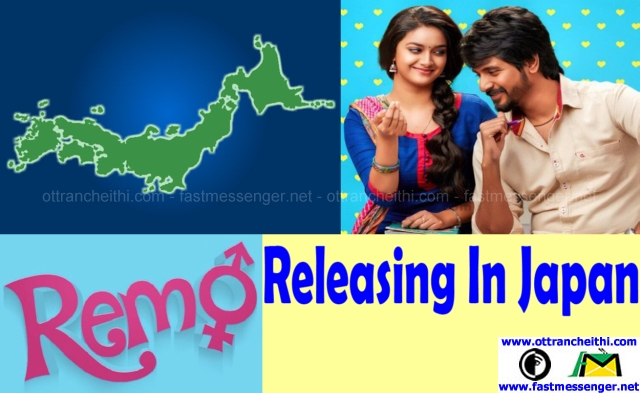 Sivakarthikeyan who has done only seven films is considered to be one of the major Box-office gainer in the Tamil Film Industry. His films have till date given only profits among the exhibitors, distributors and producers. His movies have earned good remarks amongst the audiences. Most of the kids love watching Sivakarthikeyan’s movies and that had been a greater plus for him.

Sivakarthikeyan’s forthcoming film REMO is said to be releasing worldwide on 7th October 2016. Keerthi Suresh is pairing with Sivakarthikeyan in the movie. The movie is being directed by Bakiyaraj Kannan, cinematographed by P.C.Sreeram and music scored by Anirudh. The movie is produced by R.D.Raja for 24AM Studios. Most of the screens in Tamilnadu have been occupied by REMO. REMO to hit silverscreens in Japan is a Bonus for REMO and Sivakarthikeyan. It was only Rajinikanth’s movie from his “Muthu” that was welcomed by the Japenese audience.

Now Sivakarthikeyan’s REMO has been given a warm welcome by the Japenese audience and the movie is being released by ‘Madras Movies’. REMO is releasing in three areas in Japan on October 8 and 9th i.e, Aeon Ebina-Oct 8 (Sat) and Skip city,Kawaguchi-Oct 9 (Sun) and Aeon Nagoyachaya-Oct 9 (Sun).

REMO’s release in Japan has to be considered as a positive sign in Sivakarthikeyan’s career.