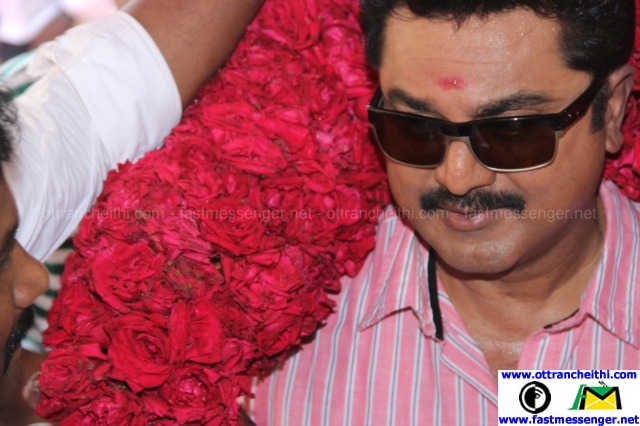 Today the 25th of February 2015, Sarathkumar, President of South Indian Artistes Association addressed the media persons. He said that had met Superstar Rajnikanth and ‘Rockline’ Venkatesh to resolve the ongoing “Lingaa” controversy. Parallel to it, Sarathkumar has met a representative of the “Lingaa” distributors separately. He added that Superstar, on humanitarian grounds wished to pay an amount as compensation to the affected distributors. In regard to it Sarathkumar would be meeting the office bearers of the Tamil Film Producers Council (TNFPC) at their office by today to find an amicable solution to the ongoing “Lingaa” controversy between the distributors and the Hero and Producers of the movie within a day or two.

Sarathkumar also said that a discussion is going on within the associations of the Tamil Film Industry to eradicate Video Piracy. He also added that he would be fully supporting the initiative of Director Cheran on bringing out the new concept of Cheran’s C2H, a concept of Cinema to Home. The media meet was arranged to thank the media for their support for his recently released movie “Sandamarutham” directed by A.Venkatesh. He also thanked the audience for their support for the movie and said that the movie is running fine in theatres.

Sarathkumar has to be appreciated for his broad-mindedness in voluntarily updating about a fellow actor’s movie issue in a positive manner in his private press meet.

Court Grants Temporary Injunction against distributor Singaravadivelan and others: