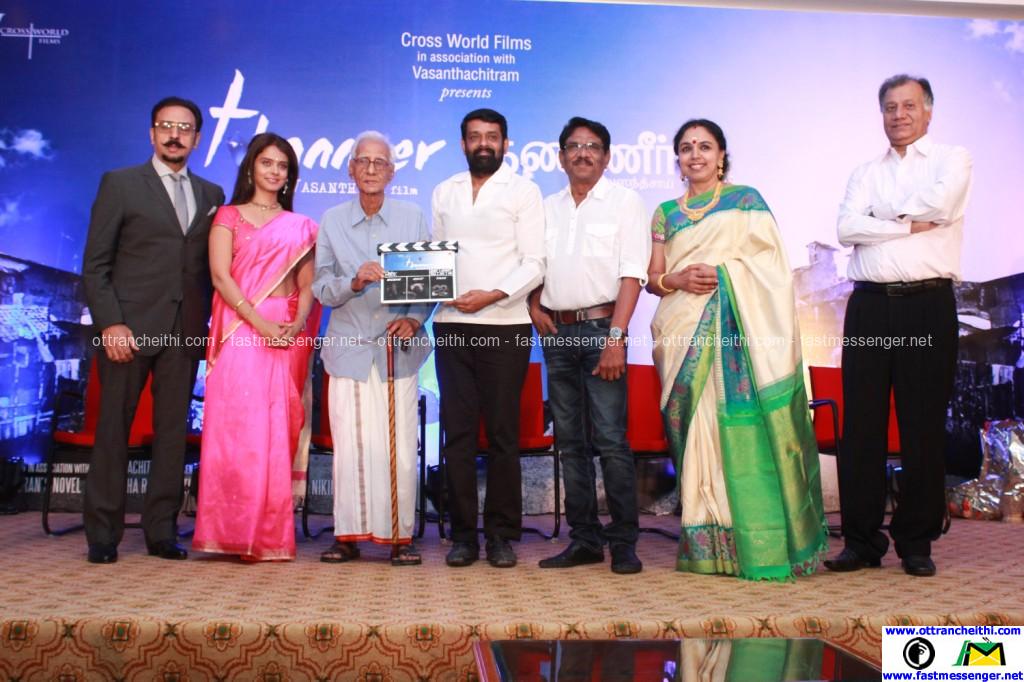 Director Vasanth who had earlier worked with the Tamil cinema’s legend director Late. K.Balachandar made his debut in Tamil film “Keladi Kanmani”. He had earlier directed nine movies and “Thaneer” is said to be his tenth directorial venture. Director Bharathiraja was the Chief Guest for the launch of the movie “Thaneer”.

The grand launch of the movie “Thaneer” took place today at a star hotel in Chennai. The movie is been directed by Vasanth and the story of the film has been adopted from the Tamil novel “Thaneer” written by Ashokamithra who is said to be one of the ace writers of Tamil novels. Sudha Raghunathan who is a renowned Carnatic singer is debuting as a Music composer through this film.

Gulshan Grover is doing the lead role in the movie. Gulshan Grover is the first successful actor who had made his transition from Bollywood to Hollywood. He has acted in more than 400 films in various languages. He has been highly appreciated for his villain characters performed in many films. He is called by the name of “Bad Man” in Bollywood. Chandini SSacha an actor from the Kannada film industry doing her lead role along with Gulshan Grover. Hollywood’s cinematographer Rolf is handling the cinematography of the movie “Thaneer”.

Ashowamithran while addressing the function said that all he writes is only for him to read. He said that many movies where hard work has been spent couldn’t succeed, but there are movies which succeeds with simple efforts and that is cinema.

Sudha Raghunathan said that Vasanth is a very good music lover and he puts his effort to get the best of the music. She also added that though she concentrates and performs for Carnatic music, she is a fan for the songs of Vasanth movies. She also says that it doesn’t mean that she is not knowledgeable about the music for movies, she says that she spends at least 4 to 5 hours a week to listen to songs of movies.

Gulshan Grover while speaking said that he never aimed to do the role of a hero in the film and his entry into the Bollywood indsutry he decided only to become a star Villian. He added that Director Vasanth had given him the story and the screen-play for him to read and go through it.

Chandini SSacha said that she has been strictly advised by Vasnth that she has to do her dubbing in Tamil in her own voice for this movie. She was very happy to express her feeling that she had heard about her her character “Jamuna” and that would be outspoken very much and will be one of her best in acting.

Vasanth said about the photograph of his mentor K.Balachandar which Balachandar had given him. That photograph is said to be the only photograph which Vasanth keeps at his office. Vasanth while talking about Sudha Raghunathan said that today whoever has got a Keyboard is able to become a music director. But as far as Sudha Raghunathan is concerned, she is a renowned classical singer and well versed in music composition and hence she has been asked to compose music for the movie.

Finally Bharathiraja said that Vasanth had fixed up the Hollywood Cinematographer Rolf for this film. But during his tenure he had hired the same cameraman for more than ten films of his. He said that he had always been a teacher and was not aware about the Technical developments. He wished to be a student now getting trained from today technicians and directors.